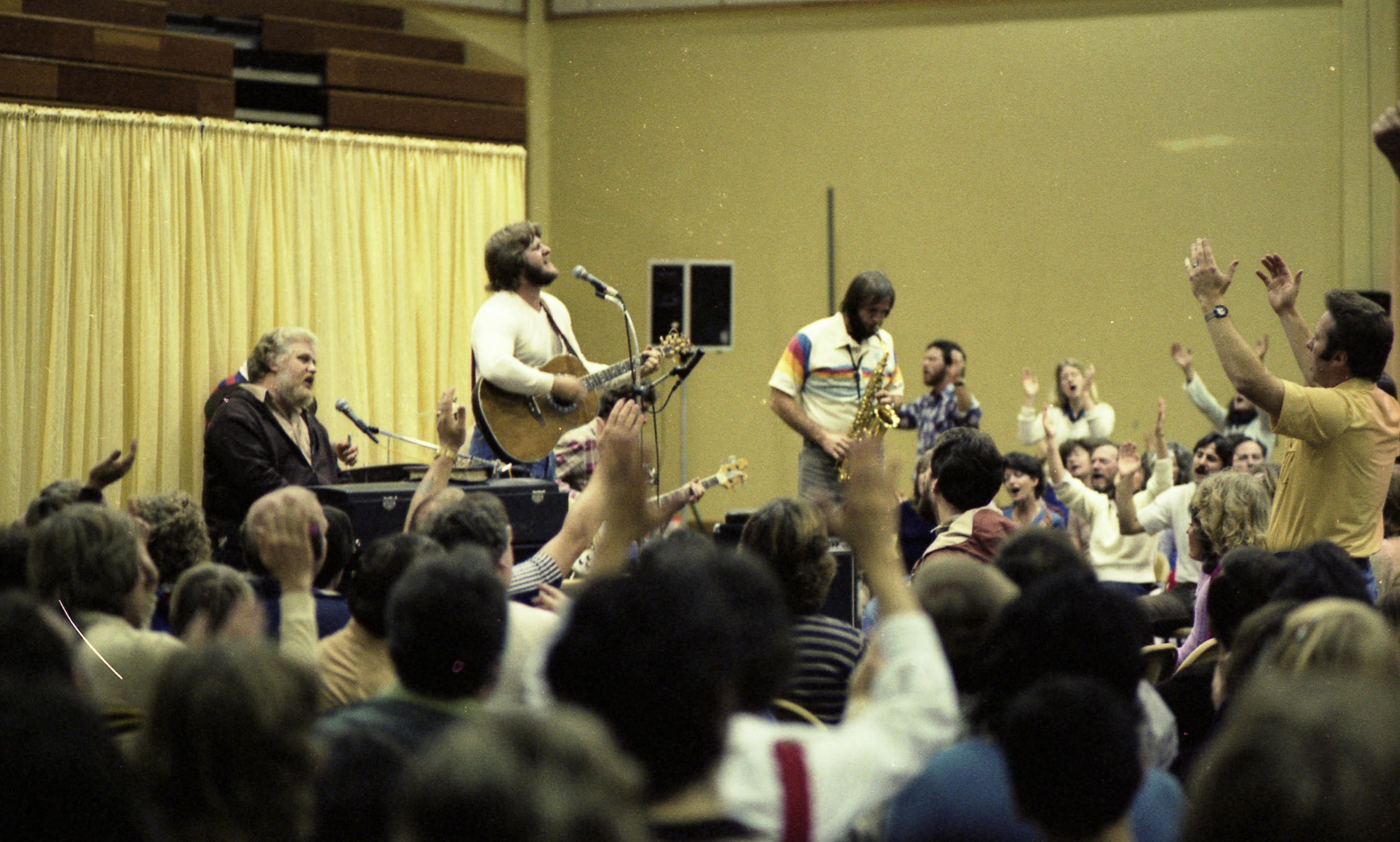 Reaching this generation with the power of the Gospel.

The Vineyard movement emerged on the scene in the late 1970s, at what has been called a “crossroads” of American Christianity and culture.

The Jesus People movement of the 1960s was a spiritual awakening within hippie culture in the United States, as thousands of young people found themselves on a desperate search to experience God. Not finding Him through drugs, sex, or rock’n’roll, the hippies were one of the subcultures powerfully impacted by ministries such as Calvary Chapel (Costa Mesa, CA) that arose during this move of God across America.

Kenn Gulliksen, a soft-spoken, unassuming leader with a passion to know and walk with God, started a church in West LA in 1974, sent out by Calvary Chapel.

This would be known as the first Vineyard church. Average people, as well as actors and musicians whose names would be familiar to us today (Bob Dylan, T-Bone Burnett, Keith Green), were connected with Gulliksen and the Vineyard.

The Birth Of A Movement

From Gulliksen’s church, the first Vineyards were planted in 1975. Believing that God had instructed him to do so, Kenn officially gave the name “Vineyard” (from Isaiah 27:2-3; John 15:5) to this association of churches, and led them for about five years. By 1982, there were at least seven “Vineyards” in a loose-knit fellowship of churches.

John and Carol Wimber, who had become a part of Calvary Chapel, had a journey with God that was leading them to a convergence orchestrated by the Holy Spirit.

John and Kenn became friends, and in 1982 it was clear that John was emerging as the leader of the growing network of Vineyard churches. The official recognition of this transition took place in 1982: the emergence of what was to be called the “Association of Vineyard Churches.”

Today, there are 2400+ Vineyards around the world in 95 countries – and we’re growing. Read below to learn more of the history behind one of today’s most passionate church planting movements.

John Wimber’s influence profoundly shaped the theology and practice of Vineyard churches, from their earliest days until his death in November 1997.

When John was conscripted by God in the mid-60s, he was, in the words of Christianity Today, a “beer-guzzling, drug- abusing pop musician, who was converted at the age of 29 while chain-smoking his way through a Quaker-led Bible study.”

In John’s first decade as a Christian, he led hundreds of people to Christ. By 1970 he was leading 11 Bible studies that included more than 500 people! John became so fruitful as an evangelical pastor he was asked to lead the Charles E. Fuller Institute of Evangelism and Church Growth.

He later became an adjunct instructor at Fuller Theological Seminary, where his classes set attendance records. In 1977, John re-entered pastoral ministry to plant Calvary Chapel of Yorba Linda, which would become Vineyard Anaheim.

Carol Wimber talks about the start of the Vineyard.

The Theology Of The Kingdom Of God

During this time, John’s conservative evangelical paradigm for understanding the ministry of the Church began to grow.

George Eldon Ladd’s theological writings on the kingdom of God convinced John intellectually that all the biblical gifts of the Holy Spirit should be active in the Church. Encounters with Fuller missiologists Donald McGavaran and C. Peter Wagner, along with seasoned missionaries and international students, gave John credible evidence for combining evangelism with healing and prophecy.

As he became more convinced of God’s desire to be active in the world through all the biblical gifts of the Spirit, John began to teach and train his church to imitate Jesus’ full-orbed kingdom ministry. He began to “do the stuff” of the Bible, about which he had formerly only read.

As John and his congregation, mostly made up of former Quakers, sought God in intimate worship, they experienced empowerment by the Holy Spirit, significant renewal in the gifts, and conversion growth.

Since it soon became clear that the church’s emphasis on the experience of the Holy Spirit was not shared by some leaders in the Calvary Chapel movement, John’s church left Calvary Chapel in 1982 and joined the Association of Vineyard Churches.

As Vineyard Anaheim grew, it became a vibrant church of thousands (while still meeting in a high school gymnasium!) gaining world-wide attention. Thousands of unchurched people came powerfully into relationship with Christ, and the church worked to disciple and train those young Christians in their newfound faith.

John was asked to teach a now-famous course at Fuller Theological Seminary called Signs, Wonders and Church Growth (MC510), in which he taught on the works of Jesus, then trained seminarians to pray for the sick, hear God’s voice, and move in the Holy Spirit.  The material in this course eventually led to invitations for John and his team to train churches around the world in how to pray for and heal the sick.

A Love For The Holy Spirit

As the Vineyard grew and John’s work of renewal impacted everyone from the Anglicans to the Baptists, Wimber carried forward the heart of a child when it came to the work of the Holy Spirit. His love for the untamable work of the Spirit, based on the lasting transformations he had seen in the lives of so many, led the Vineyard through many seasons in its history.

Letting the “weeds grow up with the flowers,” the Vineyard moved in and out of varying degrees of relationship with prophetic movements and renewal movements (the famous Toronto Blessing renewal began in a Vineyard church in Canada).

The Quest For The Radical Middle

John pastored the movement with grace and wisdom during these exciting and turbulent years, writing long letters and pastoral care articles to his pastors to help them navigate the tricky waters of partnering with the Holy Spirit.

His desire was to keep the movement living in the tension of the “radical middle,” embracing both the gifts of the Evangelical tradition and the gifts of the Pentecostal/Charismatic traditions. John’s perspective could be captured in the adage: “All Word and no Spirit, we dry up. All Spirit and no Word, we blow up. With the Spirit and the Word, we grow up.”

Some of these years are documented in a powerful historical book on the Vineyard movement, The Quest For The Radical Middle, by the late Bill Jackson.

The lasting significant influence of Wimber, and the teams and leaders who served with him, has been noted by churches of various denominations worldwide, perhaps most notably The Alpha Course, New Wine, and Soul Survivor movements in the UK.

The impact of John Wimber, Vineyard Worship, and the value of kingdom theology in the 21st church cannot be overstated. Today, the Vineyard takes its place as a growing, maturing movement of passionate followers of Jesus, seeking to “do the stuff” of the kingdom of God in local churches, in the streets, and anywhere people gather.

Visit our Welcome Page to get to know us more. 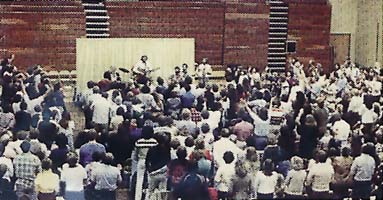 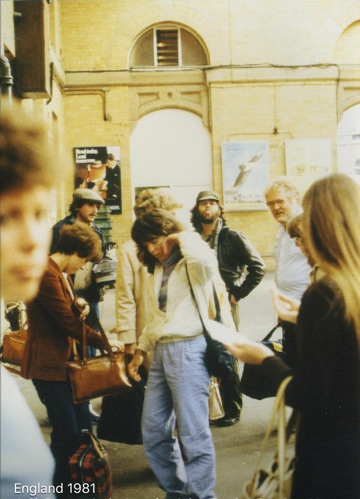 A Network Of Churches Worldwide

Over time, the Vineyard movement has grown to be a network of over 2400+ churches worldwide, and has impacted the Church across denominational lines in uncountable ways.

Calling ourselves “empowered evangelicals,” the Vineyard seeks to blend the best of the Evangelical traditions with their focus on Christ-like character and regard for the Scriptures, with the best of the Pentecostal and Charismatic traditions of welcoming the empowering of the Holy Spirit for life, ministry, and acts of service.

What is the Vineyard about today?

With our Core Values guiding us, the Vineyard movement is planting churches by the hundreds around the world, and establishing “outposts of the kingdom of God” – where the poor are cared for, the sick are healed, God is experienced in worship, and Christians are called to “do the stuff” that Jesus did. Read more about our Vineyard Global Family.

The Main & The Plain

Our experience of the Kingdom of God is rooted in the words and works of Jesus. We teach the Bible, and the main and the plain of the Kingdom.

The Already & The Not Yet

God’s Kingdom is here – it is already. It is also not fully here – it is not yet. That means we have a theology both for suffering, and for signs and wonders.

We need a constant filling of the Holy Spirit, and this ancient prayer is an invitation for the Spirit to touch us again.

Everyone Gets To Play

We believe that anyone can do the work of the Kingdom. We don’t have an elite or superstar leaders – we are all commissioned.

You’ll be loved no matter what state you are in when you come to the Vineyard. We also believe that Jesus can change us, so we say “Yes.”

We avoid all hype or emotional manipulation. Going about our lives naturally, we pray for healing and listen for God’s voice in all circumstances.

We lean toward the lost, the poor, the outcast, and the outsider with the compassion of Jesus. We are all in need, in some way.

Be A History Maker.

We simply believe that God is speaking and acting through ordinary people today. We are the Vineyard – find a church near you!